Self-advocates write blog posts and stories about their lives during the COVID-19 pandemic. These blog posts connect self-advocates to each other. If you would like to share a blog post, please email chloeahlf@arcminnesota.org. 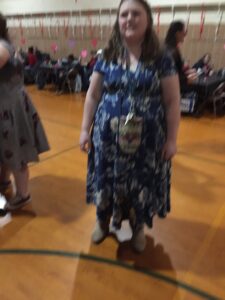 Hello, my name is Nikki Wunderlich.

I am 35 years old. I live in my own apartment, and I am in the process of trying to get my guardianship back. I was born legally blind. I see something at 20 feet that someone with 20/20 vision would see at 500 feet. I have Septo-Optic Nerve Hypoplasia, which means my optic nerves are too small because they quit growing. I also have hypopituitarism, which means my pituitary gland doesn’t make enough of the hormones made by the pituitary gland such as cortisol growth hormones and other hormones. Therefore, I take meds to correct that problem. I used to take growth hormone shots anywhere from three to six times a week to correct the growth problem. I didn’t like the shots but I put up with them because I had to. The meds I am on to correct the other problems are not that bad.

I went to Preschool in Owatonna where I met my best friend, Hope, who is still my best friend to this day. During my kindergarten year my mom and dad got divorced. Then I moved to Dodge Center where I attended Kindergarten through most of sixth grade. During my sixth grade year, we had my IEP where my school district told me they wanted to put me in one room all day except for lunch and physical education. That didn’t fly with my mom and I. We looked at each other and were like no way! They wanted to put me with my vision itinerant teacher. Then when my vision teacher that comes to my district to help me with things found that out and found out that I didn’t want that, she suggested The Minnesota State Academy for the Blind. We decided I would try that school as a day student for the rest of that year and if I liked it I could go back in the fall. I liked it so much, I learned about all these different activities students could be in if they stayed in the dorms, that I begged my mom to let me be a dorm student the following year, and fortunately she agreed even though she didn’t like having me away from home because she missed me.

I was in a lot of different activities at the Minnesota State Academy for the Blind also known as MSAB. I was in track, cheerleading, swimming, goal ball, what they called forensics which was basically giving speeches. I was an activities assistant, a junior lifeguard, and I did a lot of school dances. I was also prom queen one year. I graduated from MSAB in 2004. Then I went to Vision Loss Resources also known as VLR, and I was there for 9 months getting blindness training like O&M, which stands for Orientation and Mobility cooking Techniques of daily living, where they would help you learn things in an apartment setting that you needed to know like laundry, sweeping, vacuuming ect. I also had technology classes and woodworking classes.

Once I left VLR I went to college for the first time, and it started out ok, until someone broke into my room, changed their voice so I wouldn’t recognize it, and started flickering my light on and off very fast and saying my name over and over. This scared me very badly, because I had locked my bedroom door and I was almost asleep when this happened. I didn’t sleep for three days after that, and when my mom picked me up that Friday I broke down in tears and told her what happened. Shortly after that I would get migraines that would last anywhere from a day to three days,and I would have anywhere from two to three of those headaches a week. So I failed my first year in college, and after that I didn’t want to go back to college the next year.

After that I lived at home with my mom for a while, and dated a guy I knew from MSAB, and we eventually ended up engaged. Since I was not working or going to school I was staying up late, and sleeping in late. Sometimes I wouldn’t even go to bed, but for the most part I did. The guy’s name was Kyle. He lived in Wisconsin and we barely got to see each other which was hard, but we talked on the computer and on the phone a lot. Then after a while of us being engaged he told me if he could be with both me and this other girl who was sixteen at the time he would be with both of us. I was like no! For two reasons, one she was sixteen and we were in our early twenties and two, I do not share my man with any other woman in a boyfriend girlfriend way. Then he started ignoring my phone calls, my Skype calls, my MSN messages, my Skype messages, my AOL messages and my emails for days up to a week at a time, so I decided it was time to leave him. So I called and arranged a get together with him and I gave him his ring back and I told him it was over.

Shortly after that my wonderful niece was born, and my sister asked me to be Abby’s God mom, and I was so honored I was speechless for a few seconds then I hugged my sister, and I was like of course I will be Abby’s God mom!!!! Before Gage was born though, my grandma on my mom’s side passed away and I took it very hard. Then about a year and a half later my nephew Gage was born, he is also wonderful!

Fast forward a few years Mike and I got together when I moved to Mankato for a few months, because at the time I didn’t know it was only going to be for a year. Then when I moved back to the cities for a while I ended it with him. It was very hard to do because I loved him very much back then. I stayed at my dad’s for ten months, and then I went to another adult foster home which was ok except they put our meds on little plates on the table and expected me to be able to tell mine apart from the other people’s pills that were living there. Usually I could, but one time I thought I took mine and accidentally took another person’s pills and they just told me not to tell anyone about it that I would be fine, even though the other person was on totally different meds than me. Needless to say, my anxiety got the better of me and I ended up telling my dad, who was furious, and he had me call my sister and tell her what happened and she said that I should be monitored for side effects and she came and picked me up. That day I had plans to go to my friend Tara’s house, but that ended up not happening on that day.

We did not have me go back to that house, after that I moved in with my sister. She kept hitting me until I told her to stop, and put my arms over my head to stop her from hitting me on the head. Then my guardian sent me to my dad’s, even though I told her not to send me there because my dad wouldn’t believe me and that he would probably pressure me to tell what he thought was the truth. He did pressure me to tell what he considered to be the truth, but I wouldn’t budge in my story so he took my phone away and monitored everything I did on my computer and everywhere I went. I felt like I couldn’t talk to anyone so I eventually ended up feeling suicidal. I had a plan and everything, thank goodness I had an appointment with a therapist that day and was able to tell them everything. I lost the extra phone of my dad’s that he was letting me borrow, which was an accident and my dad to this day claims was on purpose, and then my guardian got me out of that situation with my dad and moved me to a safe house for a few days until they could find me a place to stay.

They found a bird and lodge in Owatonna where I was for about a month, then I went to a group home for about a year and a month. Then I moved out on my own again. For a while it was just me then my sister gave me her wonderful dog Finn. I loved that dog and still do. When I would leave the apartment Finn would bark, so my guardian made me buy a bark collar for Finn, which I hated putting on him because he hated wearing it he would always lay down to make it more difficult for me to put it on him. Then I got sick with Pneumonia and couldn’t take him out as often as I would have liked, and he was having accidents in the house. Then my guardian made me give him up, which took a toll on my depression. I ended up going in to the hospital because I was very depressed.

While I was living in that apartment, Mike and I got back together. Then I ended up moving out of that apartment a while later, because of a suicide attempt because I was really depressed. I was in the hospital for about two weeks, then we made a plan that I would go stay with my dad until we found me a place to live. I was there for about 2 months. We looked at a few adult foster homes, but they didn’t fit so we decided to have me move in to where I live now. I started out with twenty-one hours a week of staff, and now I am down to six. I have lived in my apartment for a year and five months. I love it here. I am involved in Action Club, Different Drummers, Sam SW, and spend time with family and friends. If you have read this far thank you for reading, and I hope you enjoyed the read.